Bhoomi Devi is our Sacred Goddess Mother Earth. She is the mother of every life that has ever taken birth from her and has lived upon her. Our Sanathana Dharma provides us with the spiritual and philosophical tools for a deep ecological approach that acknowledges and worships the inseparable nature of Divinity and Mother Nature. The epitome of forbearance, compassion, and patience, she holds us and carries our weight on our evolutionary journey. The weight of our actions, both individual and collective, bear heavily upon our Mother. It is for this reason that we remind ourselves every day when we wake up and place our feet on her, with a prayer, seeking her forgiveness:

Oh Mother Earth, You Who have the Ocean as Your Garments, and Mountains as Your Bosom, O Consort of Lord Vishnu, Salutations to You; Please Forgive the touch of my feet on Earth, which is Your Holy Body.

Earth as a Superorganism:

Scientists did not shy away from the idea of viewing the earth as a living entity in the 1700s. James Hutton, known as the father of geology is recorded to have said at the Royal Society of Edinburgh that he thought of Earth as a superorganism and that its proper study would be by physiology. Much like the human body and its various systems that work interdependently, the Earth too functioned like a single organism, he said. He referenced Harvey’s theories of circulation of blood in our body and compared it to Earth’s nutrient cycles and water cycles.

As science became more fragmented in its approach, this wholesome view of the earth did not proceed into the scientific thought of the next century. In the 1970s, a British scientist named James Lovelock put forth a hypothesis that viewed the Earth as a single organism and suggested that living organisms on earth interact with their physical and chemical surroundings to form a synergizing and self-regulating complex system that co-evolves life on Earth. He named it the Gaia Hypothesis – Gaia being the Goddess Mother Earth in Greek Mythology and popularized ‘geophysiology’. According to Lovelock, the evolution of Earth and the life forms on earth, was a tightly coupled process and not separate parallel processes. The Earth’s habitability, the global temperature, its oxygen-rich atmosphere, the ocean salinity, and its relatively stable climate are maintained in a state of homeostasis not just by abiotic processes but regulated by the beings on her and by Gaia herself, as a superorganism.

The hypothesis initially drew much criticism and ridicule, citing lack of scientific rigour and was accused of being theological and esoteric. The hypothesis has now been recognized as ‘Gaia Theory’ as it is supported and backed by numerous scientific experiments and the theory is being researched further in the multidisciplinary fields of Earth science, evolutionary biology, and biogeochemistry.

Human Body and the Earth System:

The Human Body can serve as a good model for the Earth system. Both are living systems, with physical, chemical, and biological interactions happening continuously. References in the Puranas:

The earliest sacred texts are galore with Hymns and Chants in praise of her!

She is the daughter of Kaashyapa Prajapati and is also known by the name Kaashyapi. Prithivi Mata (Mother Earth) is the divine consort of Dyaus Pita (Sky Father). They, the Sky and the Earth are together addressed in the Rig Veda as ‘Dyāvāprthivī’ and are parents of innumerable beings as well as divine beings such as Indra, Usha, and Agni. The Rig Veda states that Dyaus impregnates Prthivi through rain leading to the birth and growth of a wide variety of flora and fauna. Dyaus is represented as a bull and Prithvi Mata as a cow and both play an important role in creation.

In Puranic texts, the role of Dyaus diminishes with the emergence of other elements with specific functions and the nature of Prthivi also changes. Prithvi is mentioned as Bhumi Devi and is the personification of Mother Earth and the symbol of fertility and prosperity. She is none other than Goddess Lakshmi and whenever she is in need of help, her consort Lord Vishnu comes down as an avatar to save her.

In the Satya Yuga: Varaha Avatar

Once, the powerful demon Hiranyaksha reigned supreme over the entire world after obtaining several boons from Lord Brahma. He torments the Devas and all beings and they leave their heavenly abodes and hide in the caves and mountains on Earth. Hiranyaksha, whose giant body covers all directions, dislocates Bhumi Devi from her position in the orbit and submerges her into the Garbhodaka Ocean, causing great suffering for her and all beings supported on her. Extremely distressed, she pleads to Lord Vishnu for her rescue, who incarnates only under extraordinary circumstances for restoring Dharma. Lord Vishnu, assumes the form of a giant boar and dives into the cosmic ocean, rescuing and bringing Bhumi Devi out on his snout and piercing Hiranyaksha to his death.

There are two ways this story is looked at in-depth:

Sita Maa – Daughter of the Earth

In the Treta Yuga, 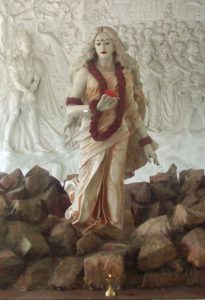 Sita Devi is central to the Ramayana as the wife of Lord Rama, the seventh Avatar of Lord Vishnu. Sita Devi is found by the great King Janaka in the soil, while plowing the field. She is not born from a woman’s womb but is born out of Bhoomi Devi. Sita is the daughter of Bhumi Devi as she is born from the womb of the earth herself. Sita means furrow, or the line made by the plow. King Janaka adopts her as his own daughter and in a conversation with Rishi Vishwamitra in the Balakanda, refers to her as ayonijā – of non-uterine birth and Bhūtalāt utthitā – She who rose up from the surface of the Earth. After the battle Sita, when asked to go on exile even after walking through Agni Pariksha as a test of her chastity, is hurt and reminds Lord Rama “O knower of virtuous conduct! My birth was from Janaka in disguise; but was actually from the earth. My sacred birth of such a high degree, was not honoured by you.” Later on, Rama is reunited with his sons Lava and Kusha and asks Sita to return back to Ayodhya with him. Sita, having already been through captivity and a long period of painful separation, wants to go back to her Mother, Bhumi Devi. With folded palms, she requests her mother to take her back in and the earth opens up and takes her into herself. This holy place is known as Sita Samahit Sthal is located in Uttar Pradesh between Prayagraj and Varanasi.

In the Dwapara Yuga, several Asuras were ruling on Earth, having taken birth as powerful Kings. Unable to bear the weight of their evil actions, Bhumi Devi pleads with Lord Vishnu to relieve her from the immense pressure of the evil forces.

Insights from the Bhumi Sukta:

The Bhumi Sukta in the Atharva Veda is one of the oldest hymns in Praise of Mother Earth.

1.Bhumi is sustained by Dharma

What sustains the Earth?  Satyam – Truth, Ritam – Cosmic Law and pious actions, Ugra Deeksha Tapah – Passionate devotion and penance, Yajna – offerings are what holds the earth and sustain it.

2.Our relation with Bhumi goes beyond a single lifetime

She is the witness of our Past, Present and Future. It is upon her that our great grandparents and ancestors lived and performed their actions.

3.She provides us the platform to evolve and progress

Through her mountains, slopes, and plains, she provides unimpeded freedom for the lakhs of species to grow and evolve.

4.Our lives are inseparable from Bhoomi Devi. She provides us with everything for a healthy life

She bears many medicinal herbs and plants that are very potent and makes them available for us to gain health. She is fertility personified and contains all Food and nutrition which we may obtain by ploughing.

5.Bhumi Devi is beyond the physical aspect

She is the invisible Shakti that powers the Jada (non living) aspect and not just the physical Earth. In her resides the four directions of the world.

6. Names of Bhumi Devi and her qualities

Vasudhaa (Producer of all Wealth)

Pratishtha (Foundation on which we live)

The fire at the core of the Earth, bears resemblance to the digestive fire in our belly.

King Prithu and the re-emergence of agriculture:

The Vishnu Purana provides an account of Bhumi Devi’s emergence. King Vena, who was the monarch ruling over Earth became wicked, corrupt, impious and evil. Under the rule of such a king, the entire earth was thrown into a period of darkness and despair. Mother Earth, who is only sustained by Truth, Righteousness and Tapas, withheld her agricultural bounty and fertility, leading to extreme famine and widespread hunger. The Rishis, beat Vena to death with blades of grass. Without a king, the Earth steeped further into the darkness with rising anarchy and crime. The Rishis, rubbed the right arm of the corpse of the King with grass and from there arose the radiating and majestic form of Prithu. His subjects, after having suffered extreme hunger and starvation rejoiced at his birth and pleaded and yearned for edible plants and food that the earth withheld. Prithu, with raging anger, took his bow and vowed to slay earth and strip her resources. The earth assumed the form of a cow and fled. Prithu chased her all the way until Brahmaloka. She turned and warned the King of the grave consequences of committing a sinful act as the murder of a woman. The king presented his case of the plight of his starving subjects and said that he was willing to commit this one act to secure the well being of his subjects. She then warns him that without her, the Earth would lose its ability to support and provide stability and requests the King to give her a calf, for whom she could secrete her milk and asks him to level all places for her milk to flow and restore the fertility and replenish the soil. Accordingly, Prithu uprooted mountains, cut across plateaus and plains and leveled, ploughed and landscaped the whole Earth’s surface and received the milk. Before Prithu, people consumed roots and fruits grown with great difficulty. He instructed his people to settle around plains and work on the soil and grow food. Now, the Earth, brought to life with the life-giving milk, produced bountiful yields of crops, corn and vegetables.

Thus, by granting life to Earth, Prithu became her father and she came to be known as Prithiví (the daughter of Prithu).

In Ancient Civilizations around the world:

The idea of Earth as Mother Goddess and a living entity is as old as mankind, and references can be found in many ancient civilizations. The Greeks called her ‘Gaia’ – the primordial mother earth goddess and the source of all life. Romans called her ‘Terra’. The indigenous people of Andes called her ‘Pachamama’ – she is the Inca God of fertility and the world mother. Even today, people in Peru, before drinking chicha (a traditional corn beverage), spill it on the ground and then consume it, as an offering to Mother Earth.

Amidst rising ecological crisis caused by greed-driven, undeterred and mindless plundering of Earth’s precious resources, the reverential attitude that our ancestors displayed towards Mother Earth and the restraint and caution they practiced in using her resources should become our guiding light. Mother Earth is as ancient as life itself, having withstood extreme conditions. Humans are a part of a much larger community of species co-evolving with each other in the bosom of mother earth. She is indeed a witness to our past, present, and future.

Some simple ways of connecting to the soil:

Walking barefoot on the ground

Farming or gardening (working with hands in the soil)

[5] The Earth as Goddess Bhu Devi: Toward a theory of embedded ecology in Folk Hinduism