After more than a year of living with the pandemic, many of us could be thinking about the future of jobs and what kind of changes we might see in the world. The belief in “job security” has been shaken up with many individuals losing their jobs in small and large companies all over the globe. While the pandemic has been a time of immense suffering, it also presents an opportunity for us to rethink aspects of our life that we have hitherto been pursuing in an “auto” mode. In fact, we need to have a re-look at our aspirations. For instance, is getting a job in a dream company really going to secure our future financially? Should we think of ways to be self-reliant in making our own livelihood by creating things or services that are of value to other members of society and the environment? This article looks at an interesting opportunity for “ecopreneurship”, which refers to the application of sustainable entrepreneurial principles to solving environmental problems and is something that has been gaining popularity in the recent times.

Around 2500 years ago, long before Christopher Columbus voyaged across the Atlantic to America, a great civilization thrived in the Amazonian rainforest in the continent of South America. How such a civilization could have existed had been a mystery to scientists because the Amazonian soils did not contain the nutrients necessary for growing crops.  The Amazonian soils were not just deficient in nutrients; they did not contain compounds that could hold on the nutrients, even if added by humans. Adding fertilizers to the soil does not work, because rain washes away the nutrients from the soil. So how did the Amazonian people flourish? Their secret was the knowledge of preparing a dark soil called ‘terra preta’. Unlike modern techniques of soil fertilization, the use of terra preta allows the soil to remain fertile for hundreds to thousands of years.

Scientists have still not discovered the exact “ingredients” and the methods of preparing terra preta known to the Amazonians. What scientists do know is that terra preta contains unusually high amounts of a carbon-rich compound known as biochar (or charcoal), from which it gets its black colour.

Biochar is a fine-grained, carbon-rich, highly porous product that is formed from heating wood or plant biomass in an environment with little or no oxygen. This process is called pyrolysis. Pyrolysis is distinct from burning or combustion, which takes place in the presence of oxygen. Wood or plant material consists mainly of two compounds known as cellulose and lignin. These compounds are made of carbon, hydrogen and oxygen. When wood is subjected to pyrolysis, cellulose and lignin break down. The hydrogen and oxygen atoms form water, while carbon atoms are leftover. The leftover carbon is called biochar.  Biochar can be seen in slow, smouldering fires, for example, at the bottom of an extinguished camp fire.

Biochar production in India is not new; it has been practised since ancient times by Indian farmers and the methods are part of traditional knowledge. In Tamil Nadu, for instance, pyrolysis is carried out in earth kilns. Wood logs and plant roots are stacked in layers and the stack is covered with moist earth. A chimney or a vent is made to allow gases to escape. The earth kiln is an easy and low-cost method of charcoal production. Wood logs are converted into charcoal inside the earth kiln in 3-4 days. A piece of biochar

Modern industrial methods of charcoal production make use of metallic drums, retorts and convertors, which recover the gaseous byproducts of pyrolysis for other uses.

How can biochar mitigate the ecological crisis of today?

Global warming due to green house gas (GHG) emissions has resulted in climate change and extreme weather patterns, which are threatening food security globally. The most effective way to absorb the carbon dioxide in the atmosphere is by sequestration of carbon both in trees (eg: afforestation) and in the soil, as they act as ‘carbon sinks’.

Making biochar is one of the most effective carbon sequestering methods as this form of carbon stays in the soil for many years and is resistant to chemical transformation. The key property of biochar that makes it effective for soil amendment is its highly porous structure, which is responsible for water retention, nutrient binding and serves as a habitat for soil micro-organisms.

Research shows that profound changes in microbial communities occur in biochar amended soils. Biochar amendment leads to better retention of both nutrients and carbon and minimizes loss. Biochar also influences the diversity and abundance of micro-organisms colonizing its surfaces and their activities, in a way that conserves the resources within the soil system.

To give an analogy, biochar is like the house which holds all family members and their material resources together, and provides the space for each member to perform their activity efficiently, so that the family as a whole can run successfully. 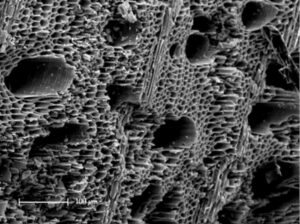 Agricultural residues such as straws of rice, wheat, millet, sorghum, pulses, oilseeds and coconut shells, groundnut shells, etc are usually burnt as it is a fast way to clear the field for further land preparation and planting. Burning leads to the release of GHGs and dangerous air pollutants, in addition to loss of valuable biomass and nutrients. The availability of biomass in India is estimated to be about 500 million tons per year. A portion of these residues are utilized as fodder for farm animals and a portion is burnt. About 93 million tons of crop residues are burnt each year in India. In Punjab alone, about 70 to 80 million tons of rice and wheat straw are burnt annually.

Preparing biochar from agricultural residues can be a powerful alternative to crop burning.  Burning a plant converts the plant’s carbon into carbon dioxide which goes into the atmosphere. But pyrolysis retains the plant’s carbon as biochar and is returned to the soil.

Pyrolysis methods can be tweaked to yield different proportions of biochar and bioenergy products such as biofuels and syngas, which can be used as clean fuel for generating electricity and heating applications.

Biochar and activated charcoal, in particular, have been found to be effective in sequestering toxic heavy metal contaminants from the soil.

Thus, we see that biochar has several applications, not only in terms of “fixing” important environmental challenges, but also in terms of enriching soil health and fertility for generations to come. These applications open up ample entrepreneurial opportunities for those who have passion and energy to make a change and also become self-reliant. An example of an innovative product development challenge is the design of efficient wood stoves that make biochar while also providing heat for cooking. Another example is providing services to farmers in terms of helping them maximize economic benefits through biochar production at the individual or community level. Creative thinking, hands on experimentation and continually engaging with the stakeholders, such as farmers, are important factors for success in entrepreneurship.