In the Anushasana parva of the Mahabharata, when King Yudhishthira questions his grandsire Bheeshma on the subject of cows, the latter says,”Cows are the foremost of all things. Themselves sacred, they are the best of cleansers and sanctifiers. People should cherish cows for obtaining prosperity and even peace. The milk, curds, and ghee that cows yield are capable of cleansing one from every kind of sin. Cows are said to represent the highest energy both in this world and the world that is above. There is nothing that is more sacred or sanctifying than cows, O chief of Bharata’s race.” [1]

Cow milk – the essence of the shadrasa He goes on to narrate the ancient history of cows and the severe austerities they undertook to attain this preeminent status, where every part of them would be sacred, purifying and prosperity-giving. Owing to this, they are even higher than the devas residing in devaloka. In the Udyoga parva, Surabhi (or Kamadhenu), the mother of cows is described as yielding milk which is the essence of the six tastes. In Ayurveda, the Indian science of health and longevity, the six tastes are known as the shadrasa – madhura (sweet), amla (sour), lavana (salty), katu (pungent), tikta (bitter) and kashaya (astringent). Food that has a balance of all the six tastes is considered to be a wholesome, balanced diet. Since milk from an Indian cow has the essence of the shadrasa, it is considered to be a complete food in itself. In the Mahabharata, one finds several stories where rishis and brahmanas sustain themselves on just milk and milk products from their family cow. [2]

Ayurveda describes health as a balance of three dynamic principles called doshas that govern the physiology of the body and mind: vata, principle of movement (blood flow, air flow etc); pitta, principle of transformation (digestion of food, processing of sensory information to knowledge, etc), and kapha, principle of stability and ‘holding together’ (building up tissues, stability of joints, accumulation of fats etc). If one of the doshas is aggravated, health gets imbalanced. One can regain health by balancing the vitiated dosha.

According to the Ayurvedic and Yogic view, the key to good health and a strong immune system is good digestion and metabolism, which is indicated by a robust agni, the digestive fire. The food that is consumed is digested and transformed into the seven primary dhatu or tissues of the body. In sequential order of transformation, the seven dhatu are rasa (blood plasma), rakta (blood), mamsa (muscle), meda (fat), asti (bone), majja (bone marrow) and shukra (reproductive fluid). Rasa dhatu is transformed into rakta dhatu, which is transformed into mamsa and so on. The superfine essence at the end of the dhatu transformation is called Ojah; it is the essence related to vitality and natural immunity. Ojah circulates via the heart and the circulatory system to all the bodily tissues to maintain their natural resistance. It fights against aging, decay and disease. On the subtle cellular level, Ojah, is the innate immunity of the cell that protects the life energy of the cell, called prana. Therefore, Ojah is influenced by the power of agni, which determines digestion and the quality of assimilation and nutrition.[3]

Improves Ojah and nourishes the dhatu

Ayurveda states that milk from a native cow improves Ojah and the natural immunity of the body and nourishes the dhatu, tissues. In fact, in Ayurvedic rejuvenation programs, milk is central to tissue regeneration as it contains many beneficial proteins, hormones, growth factors, vitamins and minerals. It improves intelligence and strength. Cow milk calms vata and pitta and increases kapha. It is described as guru, heavy to digest. Therefore, it is not recommended for those with kapha imbalance or low digestive power. As medicine, it is used in the treatment of physical weakness, tiredness, fever, urinary disorders and bleeding disorders like nasal bleeding, ulcerative colitis and menorrhagia. Milk is often administered along with herbs since it serves as a fat and water soluble media for the active principles in herbs, enhancing their pharmacokinetic benefits. [4]

Cow milk is composed of 87% water, 4.8% lactose which is a carbohydrate, 4% fat, 3.4% protein (mainly casein and whey), 0.8% minerals and vitamins A, B2 and B12. Casein forms about 80% and whey protein constitutes about 20% of the total protein content of milk. [5] Casein is a source of almost all essential amino acids and also functions as antiviral and immune regulatory factors by regulating the innate immune response. [6]

Why the Indian cow is superior

Why is the native Indian cow superior? From a spiritual evolutionary perspective, they are considered to be the earthly descendants of Surabhi, the divine cow, and hence highly blessed. Their products are health promoting and of very high quality. Even from a modern science perspective, there are key differences found in the products from Indian cows and foreign breeds.

Sharma et al. (2018) [7] did a comprehensive study comparing milk metabolite composition of native Indian, exotic (Holstein-Friesian) and cross breed cows. The type of management system was also taken into account for comparison. In the intensive system of management, high inputs such as feed and water were used with the aim of maximizing yield, while the extensive system involved zero input and natural grazing, so as to mimic the management system of ancient India which produced milk and milk products with very favourable qualities. Ten cows each of Sahiwal (native), Holstein-Friesian and cross breed under the intensive system were selected for the study, together with ten of the native Indian cows under the extensive system which were reared traditionally without any effort to improve them for commercial milk production. From the milk sample analysis, it was found that Holstein had a significantly higher amount of saturated fatty acids as compared to the crossbreed and Sahiwal. Holstein had the highest concentration of hypercholestrolemic fatty acids. Saturated fatty acids and hypercholestrolemic fatty acids lead to the formation of fatty plaque in the arteries, thereby impairing blood flow to tissue, leading to heart disease. 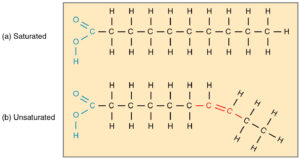 Saturated vs unsaturated fatty acid (presence of a double bond)

Milk of native cows maintained only on grazing had a very favourable nutrient profile with low saturated fatty acids, high unsaturated fatty acids and high Omega-3/Omega-6 ratio. The analysis showed significantly higher concentrations of vitamins and minerals such as zinc, iron, phosphorus and copper. In the Indian tradition, cows were not revered for high milk yield but the health-giving quality of milk that they produced. Pasture grazing and diversity in the plants eaten by cows is one of the reasons for the high quality of milk.

Bhat et al (2020) did a study on the analysis of milk proteomes (set of expressed proteins in an organism) of Kashmiri and Jersey cows. It was found that proteins involved in immune system regulation such as lactoferrin, a whey protein known for anti-viral properties and drug metabolizing enzymes such as FMO3 (that oxidizes pesticides and foreign substances in body fluids) were abundantly expressed in Kashmiri cow milk when compared to the milk of Jersey cows.[9]

The A1/A2 gene mutation – health hazards of A1 beta casein

The casein micelle is composed of four main types of proteins: αS1‐casein, αS2‐casein, β‐casein, and k‐casein. Among these, beta casein is the second most abundant protein. Different mutations in the beta casein gene have led to 12 genetic variants, of which A1 and A2 are the most common. The beta casein is a chain of 209 amino acids (the building blocks of a protein). The difference between A1 and A2 occurs at the 67th position in that chain: while A2 has the amino acid proline, A1 has histidine at the location.

A1 beta casein and A2 beta casein are digested differently. Digestion of A1 beta casein leads to the generation of a bioactive peptide (chain of 2-50 amino acids) called beta casomorphin 7 or BCM7 which affects the opioid receptors. Opioid receptors are proteins that extend onto the surface of cell membranes and are important regulators of cell signalling and communication processes throughout the body, including the gastrointestinal tract, immune system, and the central nervous system. If BCM-7 gets released through the intestinal lining into the bloodstream, it could trigger an inflammatory immune response which over time progresses to degenerative diseases. Epidemiological evidences show that consumption of beta-casein A1 milk is a risk factor for type-1 diabetes, coronary heart disease, arteriosclerosis, sudden infant death syndrome, autism, schizophrenia etc.[10]

Difference between A1 and A2 Beta Casein (Source: Demirel et al. 2018)

Since ancient times, cows all over the world had only the A2 gene. Some 8000 years ago,  mutation from A2 to A1 occurred in Holstein cows in Europe, resulting in production of the A1 beta casein in the milk of this breed. It is theorized that something in the manner of breeding, care and feeding with the goal of high milk output lead to this mutation. Further, since Holsteins were used to genetically improve the production of other breeds, the mutation was passed on to many other breeds. Over a period of time, the A1 beta casein variant became dominant in milk.

While cows in much of Asia, Africa, and part of Southern Europe mostly have the A2 gene, the Western world (including the United States, northern Europe and Australia), herds with the A1 gene producing A1 beta casein in their milk are more common [11,12].

Research on cow ghee to be continued in the next article….