It is incredible how almost all of life on Earth is anchored to the less than a feet thin top layer of the soil. The topsoil is home to most of the microorganisms, and large amounts of organic matter. It is where most of the action happens, which makes life on Earth possible. For centuries, agriculture and food production had been based on the principle of healthy soils producing healthy plants. The inception of industrial and chemical-based agriculture saw stripping the soil of its microorganisms and nutrients, overloading the soil with chemicals, leading to a loss in soil fertility.

In the last 150 years, the Earth has lost over half of its topsoil due to intensive chemical-based agriculture and other reasons. A staggering 24 billion tonnes of fertile or 12 million hectares topsoil are lost along with 27,000 bio species every year. Once lost, regenerating the topsoil, would take many years, and experts warn of the end of agriculture if we continue at the current rate. Without healthy and alive topsoil, the Earth’s capacity to sequester carbon, filter water, improve pollinator habitat and produce food would go plummeting down making it a matter of grave concern as it would directly impact food and water security.
Prolonged land degradation which eventually leads to desertification, has in the past led to the collapse of major civilizations, including the Harappan civilization. According to the Assessment on Land degradation and Restoration report by the Intergovernmental Science-Policy Platform on Biodiversity and Ecosystems (IPBES), “Currently, degradation of the Earth’s land surface through human activities is negatively impacting the well-being of at least 3.2 billion people, pushing the planet towards a sixth mass species extinction, and costing more than 10 per cent of the annual global gross product in loss of biodiversity and ecosystem services.”

Recognizing this, the United Nations Convention to Combat Desertification (UNCCD) was established in 1994 and is the only legally binding international agreement addressing land degradation, its effects and linking it with sustainable land management (SLM). Fighting desertification is also among the targets under the Sustainable Development Goal 15: Life on Land – To protect, restore and promote sustainable use of terrestrial ecosystems,
sustainably manage forests, combat desertification, and halt and reverse land degradation and halt biodiversity loss. 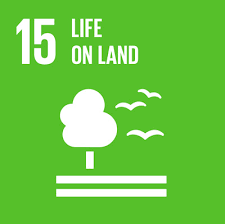 What causes land degradation?
Land degradation is caused by several factors, some natural, some direct and some are
underlying. Some main factors are :
● Excessive use of chemical fertilizers and pesticides
● Deforestation and land clearing
● Overgrazing
● Erosion by water and wind
● Urban expansion
There are several other factors such as unsustainable farming practices, over usage of groundwater, monoculture, salination, invasive species, landslides, etc. “The principle global driver of land degradation is the expansion and unsustainable management of agriculture, fuelled by unprecedented levels of consumption in an increasingly globalized economy.” says the report by IPBES.

Human transformation of natural ecosystems and trade-offs among ecosystem services and biodiversity. 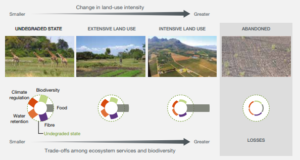 Land degradation and Climate Change: Soils as Carbon Sinks
Land degradation is a major driver of climate change. Climate change again speeds land degradation as it leads to global temperature rise leading to frequent periods of droughts. How does land degradation drive climate change? To understand this in more detail, we need to look at the following: Soil Organic Carbon (SOC) and Soil Organic Matter (SOM) Soil organic carbon (SOC) refers only to the carbon component of Soil Organic Matter. Soils act as the Earth’s largest terrestrial Carbon sink and reduce greenhouse gases in the atmosphere. Soil carbon sequestration is a process in which CO2 is removed from the atmosphere and stored in the soil carbon pool. This process is primarily mediated by plants through photosynthesis, with carbon stored in the form of SOC. The planet’s soils store more carbon than the planet’s biomass and atmosphere combined. Land degradation causes the release of carbon previously stored in the soil into the atmosphere. Between 2000 and 2009, it was responsible for annual global emissions of up to 4.4 billion tonnes of CO2. The Global Soil Organic Carbon (GSOC) map is an important stepping stone to deepen our current understanding of SOC stock stored beneath our feet from 0 to 30cm and soils’
potential for further sequestration.

Why is the topsoil so important, and why not the other layers? It is because of the Soil Organic Matter (SOM) that is present in the topsoil. SOM is the organic matter component of the soil with microbes, plant and animal detritus, nutrients, manures, sludges, leaves, stalks, and other substances synthesized by soil microbes. SOM supports key soil functions like increasing porosity for storing water and air for plant roots, stabilization of soil structure, retention and release of plant nutrients, and allowing water infiltration and storage in soil. SOM, with carbon as its main component, is crucial to soil health and fertility, water infiltration and retention as well as food production.
Sustainable Land Management (SLM) The United Nations defines sustainable land management (SLM) as “the use of land resources, including soils, water, animals and plants, for the production of goods to meet changing human needs, while simultaneously ensuring the long-term productive potential of these resources and the maintenance of their environmental functions”

The solution could lie in the problem:
Soils as a major carbon storage system, play a crucial role in conserving and restoring soils and are essential for both sustainable agriculture and climate change mitigation. Scientists say that given the importance of soil’s carbon absorption and storage functions, the avoidance, reduction and reversal of land degradation could provide more than a third of the most cost-effective greenhouse gas mitigation activities needed by 2030 to keep global warming under the 2°C threshold targeted in the Paris Agreement on climate change, increase food and water security, and contribute to the avoidance of conflict and migration. Studies have shown that an increase of just 1% of the carbon stocks in the top meter of soils would be higher than the amount corresponding to the annual anthropogenic CO2 emissions from fossil fuel burning. This is another reason to believe that rich soils can be a potent weapon to combat climate change.
Ancient references to soil types and soil fertility:
In India, for over 10,000 years we have been growing our own food without chemicals and with indegenous and traditional best practices in rhythm with nature and in tune with the soil biodiversity, we have reaped rich and bountiful produce each time. Ancient texts such as Krishi Parashara written by the grandson of Vashishta, Rishi Parashara, Kautilya’s Artha-shastra, Tamil Sangam literature and Surapala’s Vrikshayurveda extensively deal with agriculture, horticulture, soil health and plant biodiversity. 12 types of lands were mentioned based on soil type, fertility, and physical characteristics:
1. urvara (fertile)
2. ushara (barren)
3. maru (desert)
4. aprahata (fallow)
5. shadvala (grassy)
6. pankikala (muddy)
7. jalaprayah (watery)
8. kachchaha (land contiguous to water)
9. sharkara (full of pebbles and pieces of limestone)
10. sharkaravati (sandy)
11. nadimatruka (land watered from a river)
12. devamatruka (rainfed)

Soils were further divided based on the types of crops suitable for cultivation and the color of the soil. Ancient farmers mostly relied on crop residues (to bring the biomass back to the soil) manures (as fertilizers to replenish the nutrients) legumes (for fixing Nitrogen) and neem (as a potent pesticide) for enriching soil fertility. In Krishi – Parashara, it is stated that crops grown without manure will not give yield and stressed the importance of manures. Adding manure to the soil will ensure that the nutrients and carbon content that is stripped from the soil during plant growth are made up for. Now, due to chemical agriculture, and heavy marketing by chemical fertilizers and pesticide companies, farmers have been brainwashed and have almost forgotten their intelligent ways of agriculture practiced by their grandparents for generations. Sage Parashara also recommended compost preparation from cow dung. The dried, powdered cow dung is placed in a pit for decomposition where weed seeds are destroyed. Today, through Zero Budget Natural Farming (ZBNF) and other regenerative agricultural practices, we are going back to our ancient roots.

The way forward
The United Nations General Assembly has declared 2021–2030 as the UN Decade on Ecosystem Restoration and aims to massively scale up the restoration of degraded and destroyed ecosystems as a measure to fight the climate crisis and enhance food security, water supply, and biodiversity. In India, we are using Satellite imaging and Remote sensing by ISRO to map land degradation and desertification and data show alarming rates of the same. Regenerating, restoring and caring for these soils through sustainable soil management, including mulching, planting cover crops, natural fertilization and moderate irrigation is what the Earth needs. 🌎🌱