Homa farming is a method of farming with spiritual basis. It is done in a homa (yagna) environment and integrates homa and its ash as integral components in the entire farming process.

According to the science of Homa farming, 75% of the plant’s nutrition comes from the atmosphere. Most methods of farming pay attention to the soil only, and do not work with the atmosphere. However homa farming works on the principle of cleaning, healing and rejuvenating the atmosphere which in turn vitalises all life in it. Through the process of yagna, the atmosphere gets charged with ghee, nutrients and prana which enables the plants to breathe more, and take nourishment from the atmosphere. The air and atmosphere are cleansed of the pollutants. Yagnas have been demonstrated to bring rain and increase moisture content in the atmosphere. The earthworms and beneficial microorganisms in soil multiply thus enriching the soil with essential life and nutrients. Through the fumes of yagna and spraying of homa ash water, the plants are protected from pests and other harmful diseases. Research on plants grown using homa farming have shown higher nutrition value, higher shelf life, increased yield, higher resistance to disease and pests even compared to organic farming.

Like Yoga nourishes the very spirit, the consciousness of an individual which leads to growth in all dimensions – physical, mental, vital, emotional and cognitive levels; similarly homa nourishes the very source of life, the consciousness in all life forms in its atmosphere which leads to harmony and their overall well being and growth. Hence the benefits of homa farming are manifold compared to even organic farming. 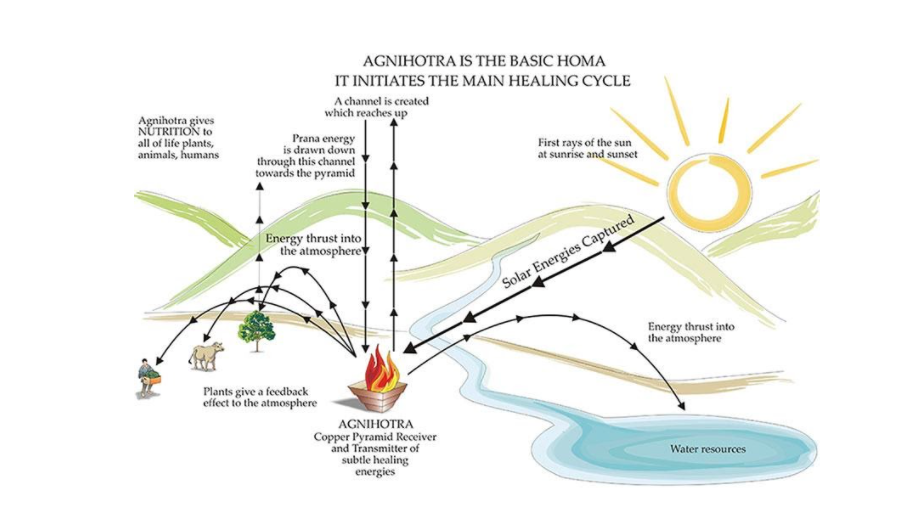 The simplest form of homa farming involves the performance of yagna usually Agnihotra yagna: a yagna done with unpolished rice, ghee and cow dung cakes at sunrise and sunset and Om Trayambak Homa.

By arranging 10 Agnihotra pyramids in a geometric manner, an area of upto 200 acres is energised. This technique is called resonance and a single arrangement can be used by multiple farmers. Typically a hut called Agnihotra hut where Agnihotra yagna is to be performed is built in the centre of the farm using natural materials. A slightly larger hut to perform Om Trayambak Homa is also built nearby. Agnihotra yagna is performed on sunrise and sunset daily in the Agnihotra hut and no other sound is emitted there.

Homa farming as a practice comes from the science of Ayurveda and was popularised in the 20th century by Param Sadguru Shree Gajanan Maharaj of Akkalkot, Maharashtra and his disciple Vasant Paranjpe ji. Today farmers in several countries practice homa farming including USA, Australia, Spain, Poland, Germany, Peru, Chile, Venezuela and Colombia. In India, pioneering research on homa farming is being conducted at CSK Himachal Pradesh Agriculture University, Palampur and University of Agricultural Sciences, Dharwad Karnataka.

Organic, non hybrid seeds should be kept in the Agnihotra hut for at least 2 consecutive yagnas. An excellent nourishment for the seed before it is planted (or the root or stem before it is transplanted in the soil) is to soak it in a mixture of cow dung and cow urine for 1-2 hours. The seeds then semi dried are put in a mixture of cow dung and ash from Agnihotra fire and planted in the soil. This provides the initial nutrition and ojas to the plants as well as ensures immunity against pests and diseases. The same treatment is also offered to stems being transplanted.

Harmonising with solar and lunar cycles

The moon exerts a gravitational pull on the earth which is commonly observed as high tides during the full moon days. The moon and star’s rays provide nourishment to the plants and ancient cultures across the world made use of this knowledge by synchronising their farming practices in sync with solar and lunar cycles. The moon also influences the soil moisture. During the waxing phase, water rises closer to the soil surface thus becoming available for the seed to grow. From the crescent to the full moon phase, the gravitational pull of the moon becomes stronger encouraging upward growth and is a good time to plant green vegetables, stems and grains. Days just before the full moon are conducive for planting trees and fruits with seeds. During the waning phase, the moonlight and available moisture tend to decrease and the growing energy is dominated by a downward pull. Hence it is optimum to plant roots such as potato, turnip, carrots and beetroots during this phase. The days of new moon are suggested to give the soil rest and one can do weeding or harvest vegetables.

About 1.25g/L of Agnihotra ash in water is kept for 3 days. This solution is sprayed on the plants and acts as a natural control for difficult pests, enhances plant’s growth and vitality. Agnihotra ash is also mixed in soil as a natural fertiliser. The ash is the key component that has multifold applications in plant and soil growth. A paste of Agnihotra ash, mud and water is also used to heal wounds in plants, in places where the branch is cut or to apply on parts affected by pests or infection. The plants heal quickly with Agnihotra ash.

Researchers have found the following benefits of using Agnihotra ash in soil compared to organic and conventional farming. It is also interesting to note that various experiments were performed to compare the efficacy of Agnihotra ash with ordinary ash (only ash produced from fire without chanting the mantras) and the results were significantly better for Agnihotra ash:

Balanced pH: Agnihotra ash has been demonstrated to balance the pH of the soil in both cases of imbalance – acidic and basic. This is especially useful in areas where cultivation is not possible due to high pH imbalance and even the use of excess chemicals does not guarantee yield. In two independent farms, one highly acidic (pH = 4.4) and one highly Protection from pests and diseases: A study conducted by Agricultural University, Dharwad, Karnataka found 20-40% reduction in pests and diseases due to Homa treatments compared to organic and conventional farming methods in case of tomato, okra, cabbage and soyabeans. Several homa farmers have reported complete recovery of their crops from fungal infections.

Higher nutrition value and yield in food: Several studies (see references) have demonstrated that with the excessive use of chemical fertilisers, the soil is depleting and the average nutrition value in our foods has been steadily declining: 10-25% less iron, zinc, protein, calcium, vitamin C and other nutrients. The decline is not just in vitamins and minerals but also in phytonutrients. These are chemicals produced by plants that have antioxidant and anti inflammatory properties and also help in fighting fungi and diseases. Lack of these in our foods has led to our bodies to be susceptible to the increased lifestyle related diseases such as osteoporosis, diabetes, hypertension, ageing, etc. Elders in the family report of the lack of ‘taste, essence and energy’ in the foods. There has been a trend of increased dependence on medicines and supplements to build our immunity and complete the dietary requirements.

Brix is an indicator of nutrient content in the food – higher Brix means higher nutrient density, better taste, resistance to disease. In Homa farming, the Brix value increased by 39% in cabbage and major nutrients such as Nitrogen, Sulphure and Potassium increased by 20%. The ascorbic acid (Vitamin C) content in tomatos was increased by 49% and upto 50% increase in micronutrients such as Fe, Cu, Zn, Mn in okra. The oil content in soyabeans was 10% higher with amylase and invertase enzymes being more than 66% and 100% respectively. In all the four vegetables, the average yield per hectare was 20% higher, plants had more number of leaves, higher fruit weight.

Homa farming is beneficial for everybody – be it the farmer, the consumer, the soil or the environment. It leads to the overall well being of not just the environment but also of the farmer, who by participating in the homa leads a balanced living. Homa therapy is known to benefit an individual mentally and physically and studies on the benefits of homa on human health have also been conducted. Homa farming is also being practiced by urban farmers and rooftop farmers who find it simple, inexpensive and with all round benefits by taking care of health in an urban environment. It is time we explore the potential of the homa farming.