Makara Sankranti is celebrated across the sacred lands of Bharata Varsha for many centuries. This celebration is also widely considered as an Agrarian festival. In our culture, this day has been a observation of obeisance to Sun and the soil, gratitude to divine intelligence and life energies, a celebration of abundance and the gifts of nature, ushering of spring, joyous harvest of pulses, cereals and crops and an elaborate offering to Devas from local produce. In this article we delve into understanding this celebration and its significance by answering some fundamental questions including – What is Makara? What is Sankaranti? What is the significance? In this process, we shall also see how nuanced the sciences of astronomy and mathematics thrived in Bharata.

Owing to the rotation of Earth along its tilted axis, we see all celestial bodies rising in the East and setting in the West. This is termed as the diurnal motion. Also as the Earth revolves around the Sun, the portion of the celestial backdrop changes through out a year. Through astronomical observation, this can be witnessed as the Sun’s movement across select segments of the celestial sphere throughout the year. That is, as the Earth moves around the Sun, the celestial object right behind the Sun changes. To our observation, it seems like the Sun is moving through the constellations with respect to the celestial sphere as a frame of reference.

In the above verse, the word Jyotiscakra refers to the apparent path traced by the Sun in the celestial sphere, as seen from the Earth. This is also referred to as the Bhachakra. This is same as “ecliptic” in modern spherical astronomy. The time taken by the Sun to go around the ecliptic once, thereby covering 360°(cakra), is defined as a Saurabda, a solar year. What is referred to here is the sidereal year, which corresponds to the time interval between two successive transits of the Sun across the same star along the ecliptic. This path of the Sun along the Bhachakra, goes through twelve 30° segments referred as Rashis or Zodiac signs. The tenth segment is called Makara Rashi or Capricorn.

Sankranti is the transit of Sun from one Rashi to another. Hence the 12 zodiac signs correspond to the 12 Maasas or solar months. Makara Sankranti marks the entry of Sun into 0th degree of Makara or Capricorn zodiac. The western calendars (Julian and Gregorian) have no scientific basis for the altering 30 and 31 days in a month. In the Indian calendrical systems, the true position of the Sun matters. On the elliptical path around the Sun, Earth’s movement will be faster near Perihelion and slower during Aphelion. So there would be a few continuous months with relatively longer duration than the others. As the Indian calendrical systems follow the true positions of the Sun, the solar calendar has number of days according to the true motion. Earth’s orbital is currently in a manner that we reach the Perihelion around January 3 every year. What is the significance?

Currently there are two significant phenomenon associated with Makara Sankranti – a. signalling the upcoming season of spring and b. signalling the onset of Uttarayana. The word “currently” has been consciously used. We would realize why in due course.

The cause for the seasons on our planet is the tilt of the Earth. The present tilt of the Earth is 23.5° This causes variance in the exposure to Sun at different points of the year as Earth moves around the Sun. So we have the equinoxes and solstices. We also can observe the southward movement of the Sun and the northward movement of the Sun with respect to the cardinal East across the year. The period of Southward movement is called Dakshinayana (period from summer to winter solstice) and northward movement (period from winter to summer solstice) is Uttarayana. Owing to the present extent and orientation of the Earth’s tilt, these phenomena happen closer to Makara Sankranti. The solar month born on Makara Sankranti is the first month starting within the Uttarayana. 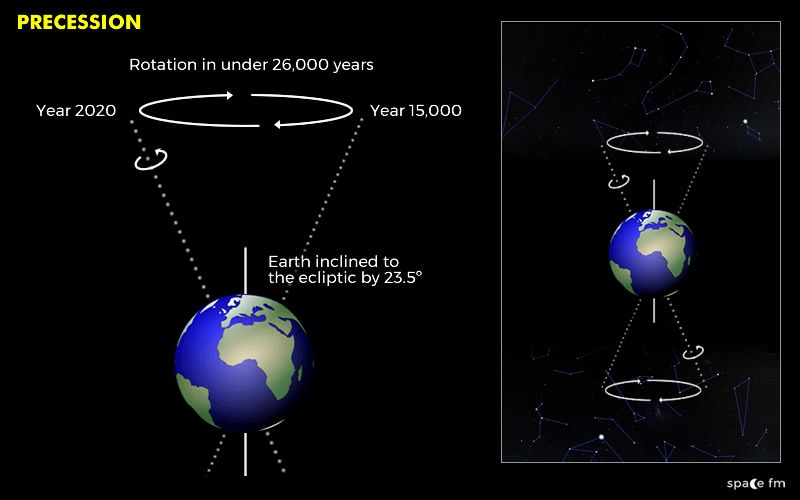 It is also scientifically well established that the extant and orientation of the Earth’s tilt has been changing. Imagine slowly rotating a tilted pen. That is how the orientation of Earth’s tilt has been changing. It has been estimated that it takes about 25,600 years for the tilt to come back to its same orientation after a full rotation. This phenomenon is called Precession of Equinox. Presently, the northern movement of the Sun started on the past winter solstice 22 December 2019. In about 72 years, there is a 1° shift in the orientation, slowly causing the dates of equinoxes, solstices and the seasons to also change. Based on this about 1728 years back, the winter solstice and the Sun’s entry into Makara would have coincided. In about 432 years the winter solstice would coincide with a different rashi. These factors reveal that Makara Sankranti has become an important phenomenon for about 2 millennia. We need to also realize that there has been an unbroken tradition of celebrating this phenomenon of Uttaryana irrespective of the period of year or month during which it occurs.

In Bharata, the pursuit to refine calendrical calculations through constant observations has led to marvellous methods and algorithms to track the true positions of planets, Sun and Moon across the celestial sphere. Varahamihira penned the Pancasiddantika in early 6th century by stating that there were earlier 18 siddhantas but at his time only 5 were extant and to preserve them, he took up the onus to document those five. Paitamaha, Vasistha, Romaka, Paulisha and Saura comprise the five siddhantas. These works deal with the various astronomical problems associated with the motion of the Sun and Moon including their true motion, diurnal problems, lunar and solar eclipses, as also the motion of the Taragrahas i.e. Mercury, Venus, Mars, Jupiter and Saturn. Starting from the planetary models of Saura Siddhanta, through thousands of years, Indian Astronomers and Mathematicians have continuously evolved methods to precisely calculate the true position of Sun with respect to the celestial sphere on any given instant at any given day.

Our astronomers realized through very long periods of data that the equinoxes precess and advocated a Nirayana System. We need to understand deeply that whenever the Earth comes to a particular point on the orbital, we see Sun come back constantly to the same Rashi. Whereas the phenomena of equinox and seasons may vary. The Sayana system is with relation to Vernal Equinox which is a varying phenomenon. The Nirayana system is with respect to the Sun’s entry into Mesha. Look forward to learning more about this this during our Indian Solar year.

Hence our traditional festivals dotted throughout our Indian calender, are not only culturally rich but also are precisely marked through the space-time complex using the Nirayana system with the stellar configuration as the reference points.