Numerous research works over the past few decades have shown how Yoga and meditation positively impact well-being and reduce stress. Recently, the molecular mechanisms underlying the benefits of Yogic practices have begun to be investigated. It is now thought that Yogic practices influence the body through epigenetic modifications. To understand the research in a simple way, let us first gain an overview of key concepts in epigenetics.

Every single cell in our body contains close to 2 metres of DNA, which contain our genetic information. A gene is a segment of the DNA that holds instructions for the production of a cell’s protein. The genome is the complete set of DNA, including all of its genes. Each genome contains all the information needed to build and maintain the organism. Since the DNA is very long, it is packaged together with proteins known as histones. The DNA wrapped around histones resembles beads on a string. This DNA-histone complex is called chromatin. The DNA and histones can be tagged by tiny chemicals which modify gene expression, by turning them either “on” or “off”. The structure of DNA shows how the DNA is packaged together with proteins known as histones, resembling beads on a string. The DNA and histones can be tagged by chemicals that modify gene expression

Genes are expressed when they are read and transcribed into RNA. The RNA is then translated into proteins, which determine a cell’s characteristics and function. Some of the chemical tags, such as methyl groups, inhibit or turn “off” gene expression, by causing the DNA to coil more tightly, making the genes inaccessible for transcription. This process is termed as DNA methylation. Some chemical tags enhance gene expression by unwinding the DNA, making it easier to transcribe and thus increasing the production of the associated protein. Acetyl groups are examples of chemicals that turn “on” the genes. Epigenetics (‘Epi’ meaning ‘above’) is the study of such modifications made on the genes, without changing the DNA sequence itself. 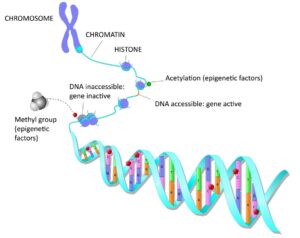 The epigenome is the key link between the genes and the environment. The chemical tags that modify gene expression are influenced by factors like diet, sleep, education, exercise, lifestyle, social support and exposure to chemicals. The resulting epigenetic changes could affect cellular aging and disease progression. However, epigenetic changes are not permanent and they may be changed in the long run via a balanced lifestyle, a healthy diet and avoiding exposure to physical and mental toxins. The field of epigenetics explains, using modern scientific frameworks, the principles that govern Indian systems of health and longevity such as Ayurveda and Yoga. The scientific community has taken a lot of interest in investigating the epigenetic changes in human beings due to a wholesome lifestyle, mindfulness interventions and Yogic practices.

As many studies have consistently demonstrated, the practice of Yoga and meditation significantly reduces stress and stress-induced inflammation. Stress-induced inflammation compromises the immune system and is also thought to be the cause of progression of chronic and degenerative diseases. Inflammation induces oxidative stress (due to an excess of reactive oxygen species), cellular death, aging and systemic tissue degeneration [1].

Researchers from Italy have done a systematic review of latest research on epigenetic and molecular mechanisms underling Yoga and other mind-body practices in the Eastern traditions [2]. Yoga was shown to reduce reactive oxygen species (ROS) levels, which is responsible for inflammation and accelerated aging.

In a 2016 study, which was the first of its kind, DNA methylation levels of immune function related genes were studied in chronically distressed women practicing Yoga [3]. The study showed that Yoga was associated with reduced methylation of the tumour necrosis factor gene, which is a gene that codes for a pro-inflammatory cytokine.

A recent study has investigated the epigenetic changes following a single day of intense meditation for 8 hours [4]. When the methylation profiles were observed after 8 hours of practice, meditators showed 61 Differentially Methylated Sites. The methylation occurred in genes involved in the immune response and inflammation,meaning that the expression of these genes were inhibited.

Various types of meditation like Transcendental Meditation, Sudarshan Kriya and Kirtan Kriya have been widely studied at a molecular level. They influence the levels of hormones and neurotransmitters (chemical messengers of the nervous system) that are affected by stress, such as:

The various types of meditation also stimulate anti-inflammatory cytokines and endorphins (chemical that acts as a natural pain reliever). BDNF (Brain derived neurotrophic factor), which is a key molecule involved in plastic changes related to learning and memory, has been found to increase after Yogic practice, in both healthy and depressed people. Such studies indicate that Yoga has the potential to counteract neurodegenerative processes due to stress by slowing down cellular aging and preserving neuroplasticity in the brain.

It has long been known that mindfulness and Yogic practices enhance our well-being by producing a state of physical relaxation and inner silence. The molecular and epigenetic mechanisms are now being unraveled through the sophisticated research instruments and technology created by modern science. Going by the trends, such a novel research field certainly appears to have a lot of scope. The insights from such research efforts would not only further the understanding of Yogic science but also provide precise information on the application of Yoga for therapeutic purposes.